We inspire, inform and connect givers.

ABOUT GIVING IS SOCIAL​

​Our vision:
A world where individuals and families delight in a generous lifestyle knowing that it is more blessed to give than to receive, and giving in a way that is life-transforming for themselves and for others.

Our mission:
To inspire a lifestyle of transformative giving, and to inform and connect givers to trustworthy, high-impact, results-focused, sustainable, and effective giving opportunities through learning and social events.

Why this mission?
Why 'Giving is Social'?
Because people are more energised to give when they do it with like-minded people. ​

How does it work?
We create purpose-minded content (social media campaigns, books, and online courses) and a wide variety of fun events to inspire, inform and connect givers. Check out our 'What's Happening' and our 'Stories' pages to learn more. 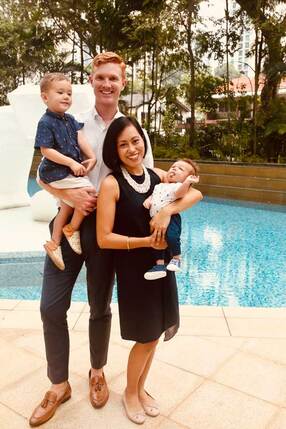 ​Giving is Social is an effort by Michael and Joanna Blanding , an American-Filipino couple who have made Singapore as their home. They believe in the principle of generosity that's talked popularly in the Bible. In their marriage, they took on a mission to continue to use their time, talents and resources to benefit causes that need them.

Giving is Social was founded by Joanna in November 2013. An advocate for poverty alleviation, children's education, and volunteerism, Joanna uses her various affiliations in the Philippines, Singapore, Thailand, Indonesia, and many other places globally, to drive these causes. Her passion in these areas finds their roots in her home country, the Philippines, where she had her first exposure to the realities of abject poverty while her father was serving in the Urban Poor Commission. She believes that a culture of generosity is key to the equitable distribution of resources that can address many of our social problems.

She started volunteering during her college days at the Ateneo de Manila University. She later became the president of U! Happy Events, a non-profit organisation that provides support and teaches values to children in low-income areas in Manila. She had the opportunity to be part of the pioneer team of the Ateneo-World Bank Youth Leaders Knowledge Development in the Philippines. She was also a board member of an orphanage called Rehoboth. In 2019, she was shortlisted as one of the 48 women leaders for the Women of the Future Awards in South East Asia.

Since she moved to Singapore in 2011, Joanna has been actively getting people together from her different circles—workplace, a church called Every Nation Church Singapore, and friends to get involved in giving back.

Michael has been supporting the youth's education and empowerment for many years now. Back in the United States, he mentored teens from low-income communities. After moving back to Asia, he partnered with the Real Life Foundation to sponsor the education of three outstanding college students. It was at a volunteer event where he met Joanna.

His was previously the Director for Corporate Responsibility for Europe, Middle East, Africa, Asia, and Greater China for the Intercontinental Hotels Group. He currently works for Berge Bulk, a global shipping company, as its Sustainability and Impact Investment Leader. These roles continue to grow his knowledge and passion for community development and sustainability.

Words From The Community